Hockey Day in Saskatchewan Coming to Martensville in 2023 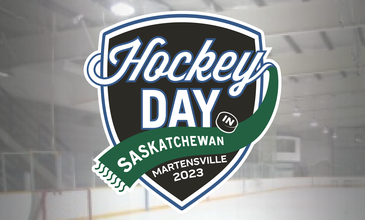 MARTENSVILLE, Sask. – The city of Martensville will be in the spotlight in 2023 after winning the right to host the 15th edition of Hockey Day in Saskatchewan (HDIS).

This also marks the first time Martensville – population 10,549 – will host the event. The event will take place from January 16 to 22, 2023, with a full schedule to be released at a later date.

HDIS is an annual event that is held on the third weekend of January. The goal of the annual event is to provide the host community with a fundraising platform to assist in the financing of local rink improvements or a new facility.

The main theme of HDIS is to promote the game of hockey, build community spirit by making the arena the focal point of activity, and celebrate the many volunteers who assist in keeping local hockey active in their community.

Situated in Zone Five (5), Martensville is a growing community that boasts tremendous volunteers and was selected by Hockey Saskatchewan as the host community to help raise funds for the creation of a new recreational facility.

During the 2021-22 hockey season, Martensville had 431 players registered with its Minor Hockey Association, equating to 33 teams from U7 to U18. All these teams are operating out of one single-ice facility alongside other programs such as the figure skating club and CanSkate program.

Back in 2014, residents started a volunteer group called Martensville Community Recreation Project (MCRP) to aid in obtaining a new facility. Phase 1 of the project is a $4 million fundraising goal for the construction of a single-ice-surface arena. The MCRP has already raised $3.189 million through events such as the sale of a Community House Build, Party on the Pond, and a 3-on-3 Tournament.

HDIS was last held in Radville last season and despite challenges surrounding the pandemic, the host community was able to raise $73,000. In 2020, the host committee in Hillmond raised $210,000. Since its inception in 2008, fourteen (14) events have amassed over $1,234,000 to help keep rinks alive and well in all communities, big and small. This event has proved to be a tremendous promotion over the past fourteen (14) years and Hockey Saskatchewan sees this event getting larger and more popular each year.

The host committee, Martensville Minor Hockey Association, will be holding a barbeque, meet & greet with players, and street hockey event to celebrate their winning bid on Wednesday, August 10, 2022. The BBQ starts at 5:30 PM (MT) with a presentation at 6:00 PM (MT) in the parking lot of the Co-op Food Store located at 130 Centennial Drive North in Martensville.

A full 2023 HDIS schedule will be released at a later date. Check out the Hockey Day in Saskatchewan website and social media platforms (Facebook and Twitter) for updates.

Hockey Saskatchewan was established in 1912 and is the governing body for organized hockey in the Province of Saskatchewan. With a mission to Lead, Develop and Promote Positive Hockey Experiences, Hockey Saskatchewan encourages competition at all levels – from recreational to high performance. Hockey Saskatchewan has grown through the years and is Saskatchewan’s largest sports organization with over 43,000 members comprised of players, coaches, and officials. For more information, please visit www.hockeysask.ca or follow us on Facebook, Twitter, and Instagram.